We all know you can't consolidate the internet or hundreds of peoples' insights, techniques, lessons into a single document.  So, I will consolidate the things I've learned, used, and shared to keep people flying right. 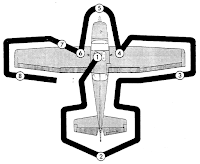